Gordon Kahl was one of the leaders of a group known as "Posse Comitatus", a loosely organized, armed vigilante group whose members engage in paramilitary training and oppose nearly every action of the federal government, particularly the collection of income taxes. 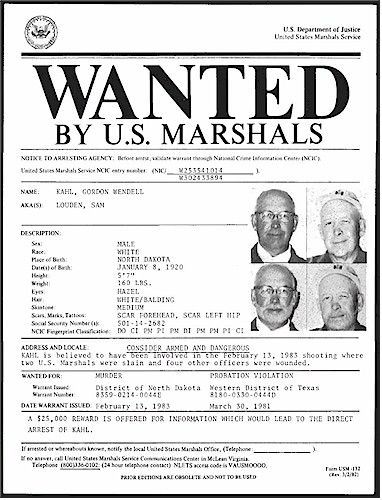 Two days after the Medina tragedy, a force of approximately 100 law enforcement personnel made up of representatives of the U.S. Marshals Service, the Federal Bureau of Investigation, and State and local agencies converged on the Kahl family farmhouse near Heaton, North Dakota, where they turned up a large quantity of arms and ammunition - but the elusive Gordon Kahl was still not to be found. By then five suspects in the killings had been arrested, including Kahl's wife and wounded son, but the father continued to elude the massive manhunt.

In a move indicative of the top priority this investigation has been given, a $25,000 reward - the largest in Service history - was approved by the Attorney General for information leading to Gordon Kahl's arrest. Many key personnel of the Marshals Service, including Marshals, Inspectors, and Deputies, are working full-time on the manhunt with the Federal Bureau of Investigation and law enforcement officials in many States and Canada. A tremendous spirit of cooperation has been shown by all of the participating agencies. On left, Original Wanted Poster for Gordon Kahl.

In June, Gordon Kahl was located in Arkansas after an intensive nationwide manhunt following the Muir /Cheshire killings. Kahl, Scott Faul and Kahl's son, Yorivon - all members of an extremist group of tax protestors - were found to be responsible for the ambush of federal and local law enforcement officers which resulted in the two murders and the serious wounding of several others. Once Gordon Kahl fled, the Marshals Service and the FBI began a joint task force investigation to locate him. During the search, Yorivon Kahl and Scott Faul were convicted of murder and sentenced. Gordon Kahl was subsequently located in Arkansas and died in a fire fight when an attempt was made to arrest him.