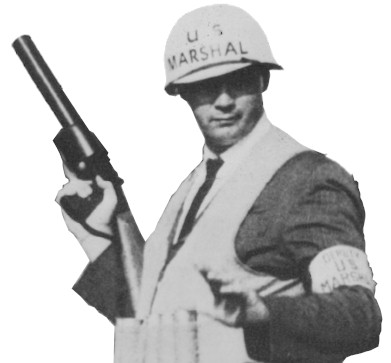 Al, as one of the first of a new breed of deputy U.S. marshal, changed American history. He was one of the key leaders who saw the U.S. Marshals through repeated tests during the Civil Rights movement in the late 1950's and 1960's. A key instructor in riot control tactics, Al trained and professionalized deputy U.S. marshals for the many challenges of the decade. His presence was vital to the success of the integration of public schools in New Orleans (1960) and the Universities of Mississippi (1962) and Alabama (1963). He also led in key protective operations, such as the security for the Freedom Riders in Montgomery, Alabama (1961); Dr. Martin Luther King, Jr.'s march in Selma, Alabama (1965); and the Pentagon detail during anti-war protests (1967).

One example of his many great contributions came on the front lines of the violent riots at the University of Mississippi —literally. Commanding the squadron directly in front of the columned registration building, known as the Lyceum, Al wore one of the white helmets seen in the many photographs of the riots. However, his helmet sported a stripe to allow his squad to follow his movements through the greenish tear gas necessary to dispel the thousands that opposed the integration efforts. All the while Al kept a calm demeanor, even smiling at the crowds to keep them calm as possible. While serving as a U.S. Marshal, Al was one of the key principles involved in forming the Special Operations Group (SOG) within the agency. Realizing the need to find a force that could respond quickly to emergencies like those he experienced in the 1960's, Al formulated early training operations for the new entity. The highly-trained force, which drew from deputy U.S. marshals around the country, became a permanent and important component of the agency.

In his retirement, Al continued to be a spokesman and a leader. In addition to being an active member of the U.S. Marshals Association, he generously donated his time to speaking engagements on history and leadership—among these was the 40th commemoration ceremonies of the integration of the University of Mississippi. He also acted character roles in several movies, including A Walk to Remember (2002), and even received the opportunity to reprise himself in the movie Ruby Bridges (1998). It was Al who coined the phrase: "You put on the badge, you do the job."

Al is survived by his wife Pat, sons Jeffrey and Gregory Butler, John LaManna, and James Uhrich; daughters Melanie Lance, Nancy Porto, and Kelly Uhrich; nine grandchildren; and three great-grandchildren. Another daughter, Julia LaManna, predeceased him. His sons Gregory and John followed in his footsteps; Gregory recently retired from the Miami Beach, Fla., Police Department, while John retired two years ago after a long career with the Bureau of Prisons. Al's devotion to law enforcement and inspiration made him a father to generations of young deputy U.S. marshals. Our agency officially sends its condolences to Pat and the entire Butler family.