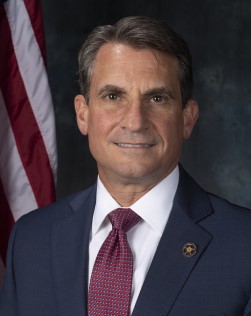 Vincent F. DeMarco was nominated by President Donald J. Trump and confirmed by the United States Senate on June 18, 2020.

U.S. Marshal Vincent F. DeMarco began his law enforcement career in 1994 as a Deputy Sheriff with the Suffolk County Sheriff's Office in New York, and in 2005, was elected to the position of Sheriff of Suffolk County. U.S. Marshal DeMarco holds the distinction of being the first uniformed member of the Sheriff's Office to serve as the county's Chief Law Enforcement Officer and oversaw an agency of more than 1,200 employees with a $180 million budget. During his 12-year tenure with the Sheriff's Office, he spearheaded the formation of a multi-agency Marine Patrol Task Force and formed a Highway Patrol Bureau, which reduced traffic fatalities by 25 percent in Suffolk County. Additionally, U.S. Marshal DeMarco was appointed to the Governor's Task Force on transforming Juvenile Justice, which produced a blueprint to reform how New York State deals with youth involved in the juvenile justice system.

The Suffolk County Sheriff's Office received numerous prestigious awards and recognition during U.S. Marshal DeMarco's tenure as Sheriff, including: first place in the National Law Enforcement Challenge traffic safety awards program; the Harvard University's School of Government Innovation Awards program "Bright Idea" for an anti-gang initiative in the county jail; and multiple achievement awards from the National Association of Counties. In 2014, in addition to serving as Suffolk County Sheriff, U.S. Marshal DeMarco was appointed to the position of Chairman of the Suffolk County Criminal Justice Coordinating Council. The Council is a collaboration of criminal justice agencies tasked with increasing the efficiency of the county criminal justice system through improved productivity and to encourage coordination and cooperation by criminal justice agencies with goal of reducing incidence of crime.