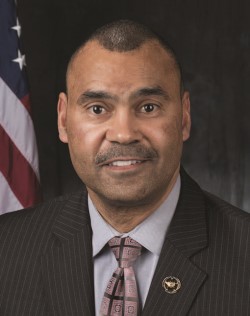 Todd L. Nukes was appointed by President Donald J. Trump on January 15, 2019 as the U.S. Marshal for the Northern District of Indiana.

The U.S. Marshals Service is the federal government's primary agency for fugitive investigations and security of the federal judiciary and courts. The U.S. Marshals Service operates the Witness Security Program, oversees all detention management matters for individuals remanded to the custody of the attorney general, and manages seized assets for the Department of Justice Asset Forfeiture Program.

Marshal Nukes started his law enforcement career with the Grant County Sheriff's Department serving as a jail officer, merit deputy and detective from 1986 to 1990. He began his career with the U.S. Marshals Service in 1990 as a Deputy U.S. Marshal in the Northern District of Indiana. In 2003, he was promoted to Judicial Security Inspector responsible for judicial and courthouse security along with managing threats and inappropriate communications. In 2008, he was promoted to Chief Deputy responsible for managing the day-to-day operations of the Northern Indiana District, and in November 2015 he was designated as the acting U.S. Marshal until his appointment in January 2019.

Marshal Nukes has served on numerous U.S. Marshals Service committees and boards to include the Judicial Security Advisory Committee, Director's Honorary Awards Committee, Chief's Investigative Advisory Board, and U.S. Marshals Service Career Board. He is an executive board member for the Indiana High Intensity Drug Trafficking Area (HIDTA), and has also served as a faculty member for the National Judicial College in Reno, Nevada on matters of judicial security.

Marshal Nukes holds a Bachelor's of Science Degree in Criminology from Ball State University and has served on their Criminal Justice Advisory Board.