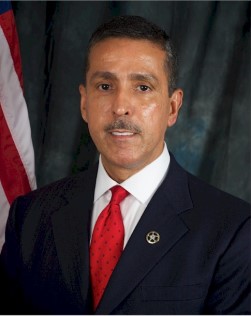 Juan Mattos, Jr. was appointed by President Barack Obama to become the United States Marshal for the District of New Jersey in July, 2011.

As the United States Marshal, Mattos ensures the protection of the Federal Judiciary and the apprehension of fugitives at the federal, state, and local levels. Marshal Mattos manages the operations of the district headquarters and two geographically separated sub-offices and provides oversight of a combination of 30 Deputy U.S. Marshals and 94 Court Security Officers. Additionally, Marshal Mattos provides oversight of the District Asset Forfeiture program which manages the seized assets of federal agencies totaling over 350 physical assets valued at around $40 million.

Marshal Mattos received a Bachelor of Science degree in Business Administration from New Jersey City University and a Master of Arts degree in Criminal Justice Administration from Monmouth University. He is a graduate of the 203rd session of the FBI National Academy and is a member of the Leadership New Jersey Fellowship Class of 2000. Marshal Mattos was also an Adjunct Professor at Monmouth University from 2004 to 2011, where he taught undergraduate courses in the Criminal Justice Department.