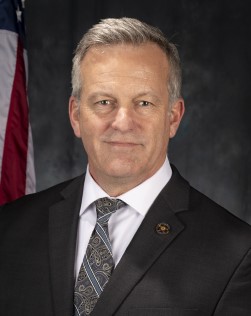 Joseph "Dan" McClain was appointed by President Donald J. Trump to become the United States Marshal for the Southern District of Indiana in April, 2018.

As the United States Marshal, McClain ensures the protection of the Federal Judiciary and the apprehension of fugitives at the federal, state, and local levels.

Marshal McClain's first career was with the United States Navy where he served from 1982 until 1995. During this time, he served on Seal teams four and six and later as a Seal instructor at the Naval Special Warfare Center.

Following his service in the Navy he went on to provide the security consulting services from 2004 to 2009 in support of the United States Department of Defense and Department of State during Operation Iraqi Freedom. He also taught at the Center for Anti-Terrorism and Naval Security Forces in Jacksonville, Florida.

Marshal McClain was elected Sheriff to Scott County, Indiana in 2011, and served in this capacity until his appointment to become the United States Marshal for the Southern District of Indiana.