Nothing explains our agency greater than the historic object. As part of the celebration of our 225th anniversary, the U.S. Marshals featured several virtual historical artifacts to educate both internal and external audiences. We "opened the vault" to better define our many missions throughout the long trail of our storied history. The age of the object varied, as will as its story.

On November 14, 2014, Ms. Ruby Bridges commemorated the 54th anniversary of her first classes at the former William Frantz School (now Akili Academy) in New Orleans. The event celebrated the historic milestone of public school integration in the city on the same day on November 14, 1960, when U.S. marshals escorted little Ruby Bridges into the School, facing angry crowds gathered outside shouting against the entry of the solitary African-American girl.

Two deputy marshals from two generations came together to honor Bridges that evening too. Charlie Burks, 92, the lone surviving deputy who escorted her to classes that November day, and Brian Teston, a young deputy from the District of Arizona who knew Bridges as a family friend, reacquainted themselves with the honoree. These two deputy marshals bridged the generations in a single moment.

"I had no idea I would be a deputy marshal," said Teston. A native of New Orleans, his mother and Bridges were co-workers and friends. Although they had not seen each other for many years, Teston recognized his mother's old friend immediately.

Charlie Burks retired in Indiana many years ago, but memories of his duties as a deputy and a U.S. Marshal never left him.

Norman Rockwell captured that moment with his famous painting, "The Problem We All Live With." Two, real deputy marshals served as models wearing the badge for the picture.

Bridges, Teston and his mother, and retired U.S. Marshal Charlie Burks and his family, gathered with others to honor the woman who once was the brave little girl who forever changed a nation. Officials unveiled a statue depicting little Ruby on the site that same night.

"On the Threshold of a Dream," by artist Jeffrey Batson, was created in commemoration of the 40th anniversary of the integration of the University of Mississippi in October 2002. The work features a distant figure following a long bloody trail to the university’s columned registration building, known as the Lyceum. Thick clouds of tear gas, used by our deputies during the riots drifts around the columns. Through the mist forms various newspaper headlines, an image of Chief U.S. Marshal James J.P. McShane with incoming student James Meredith, and the preamble to the Constitution. 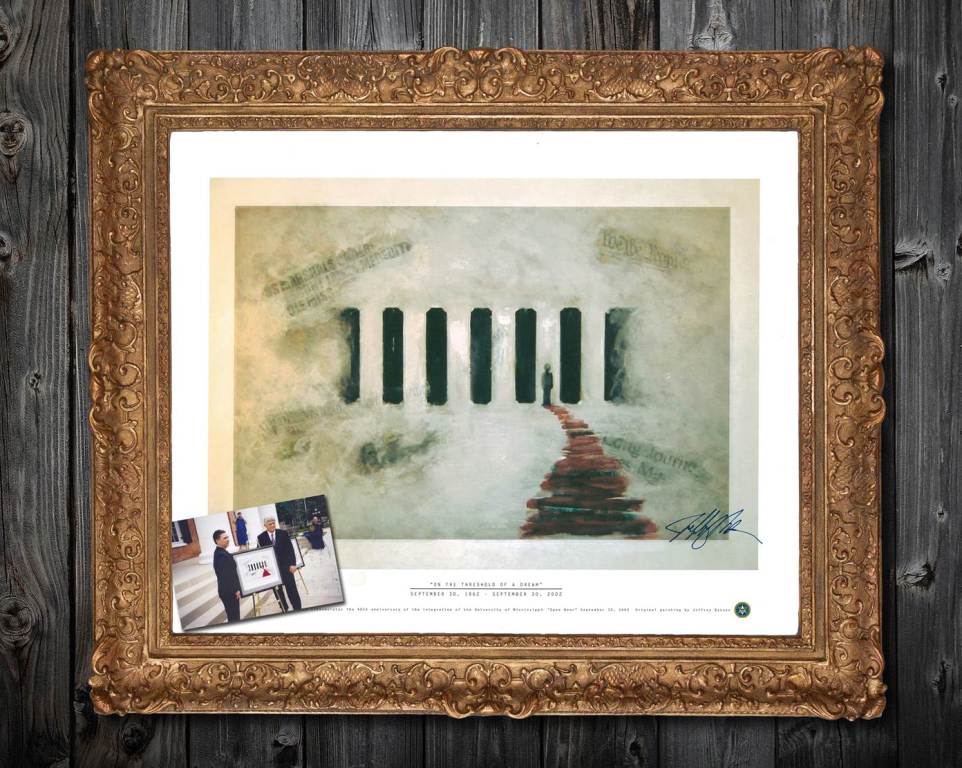 The riots on the campus of the University of Mississippi at Oxford took place on the night of September 30-October 1, 1962. Mr. Meredith was escorted onto campus while deputy and specially-deputized border patrol and prison guards circled the Lyceum. An increasingly-hostile crowd threw bricks and battery acid at the deputies. A sniper fired buckshot, nearly killing one of them. Despite having side arms, they were only allowed to utilize the gas guns at their disposal. After nearly nine hours of this standoff, the military arrived and ended the immediate crisis.

In 2002, a reunion between a number of retired deputies present at the riots and Mr. Meredith took place in Oxford. In addition, the University and the city planned entire programs for all involved, including the military and former students. All warmly invited the U.S. Marshals back. To commemorate the anniversary, a number of USMS employees worked with the artist and suggested the features given within it.

An official rendition was framed and presented by then Director Benigno Reyna to University of Mississippi Chancellor Robert Khayat for the anniversary. Circulated as an official poster, it is considered the only official art poster of its type. Despite the heavy symbolism and abstract nature, "On the Threshold" captures both deeds and goals in one piece. 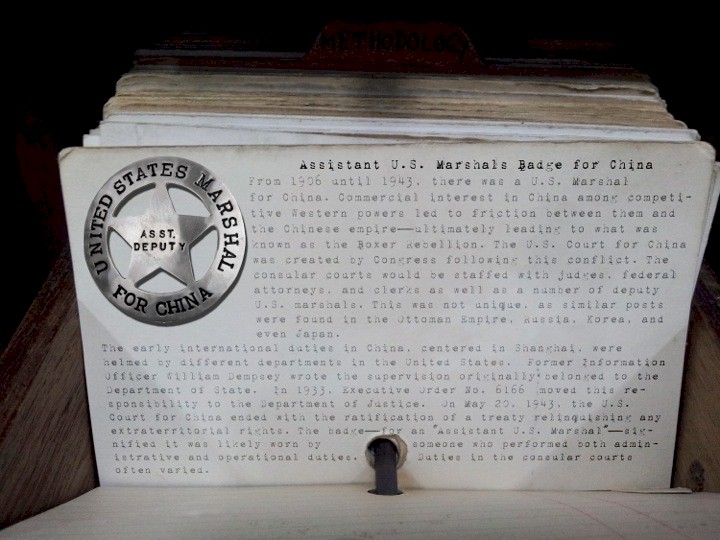 Assistant U.S. Marshals Badge for China - From 1906 until 1943, there was indeed a U.S. Marshal for China. Commercial interest in China among competitive Western powers led to friction between them and the Chinese empire—ultimately leading to what was known as the Boxer Rebellion. The U.S. Court for China was created by Congress following this conflict. The consular courts would be staffed with judges, federal attorneys, and clerks as well as a number of deputy U.S. marshals. This was not unique, as similar posts were found in the Ottoman Empire, Russia, Korea, and even Japan. The early international duties in China, centered in Shanghai, were helmed by different departments in the United States. Former Information Officer William Dempsey wrote the supervision originally belonged to the Department of State. In 1933, Executive Order No. 6166 moved this responsibility to the Department of Justice. On May 20, 1943, the U.S. Court for China ended with the ratification of a treaty relinquishing any extraterritorial rights.

The badge—for an "Assistant U.S. Marshal"—signified it was likely worn by someone who performed both administrative and operational duties. Duties in the consular courts often varied. 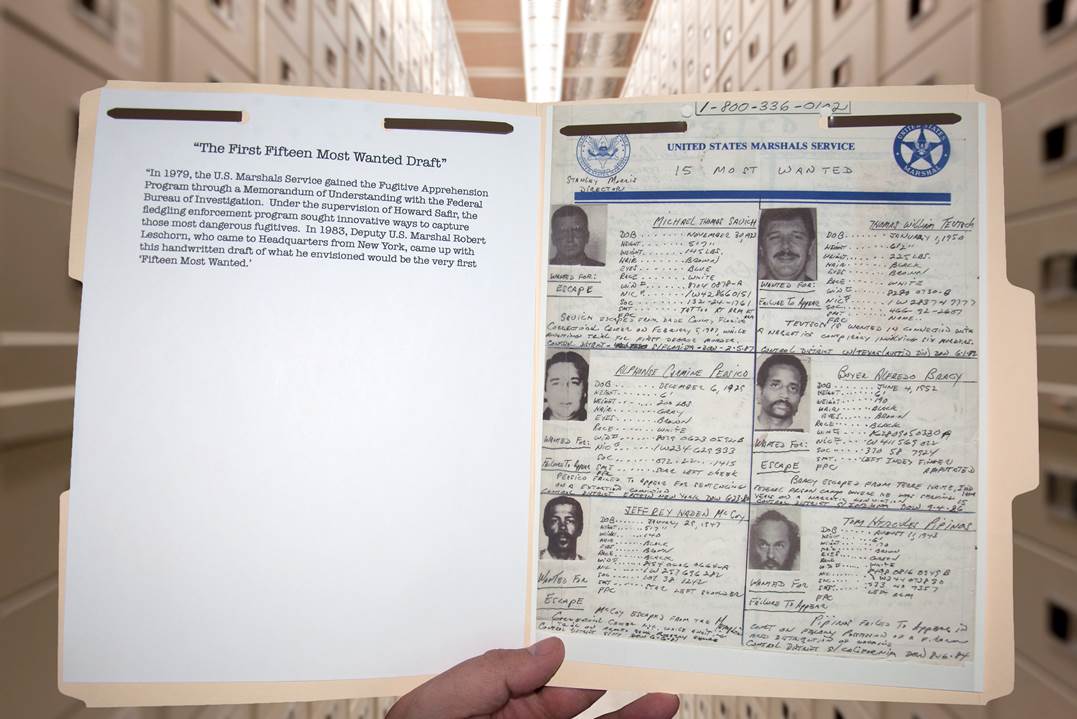 The First 15 Most Wanted Draft: In 1979, the U.S. Marshals Service gained the Fugitive Apprehension Program through a Memorandum of Understanding (MOU) with the Federal Bureau of Investigation. Under the supervision of Howard Safir, the fledgling enforcement program sought innovative ways to capture those most dangerous fugitives. In 1983, Deputy U.S. Marshal Robert Leschorn, who came to Headquarters from New York, came up with this handwritten draft of what he envisioned would be the very first "15 Most Wanted.