The Day, and the Photograph, That Changed Us

It has been twelve years since the day that changed us. By "us," which could be expanded to include the country or globe, but it certainly changed the U.S. Marshals Service. The September 11, 2001 tragedies at the Pentagon, New York City, and rural Pennsylvania are regularly observed in many ways—always with sadness with the enormity of the loss of life and institutions. These events had many heroes, and their efforts are saluted. Every year, a display case appears in the lobby of our headquarters, highlighting the anniversary date and various artifacts from the ruins. However, it is also the reminder of the many hands within our agency that healed after these tragedies. 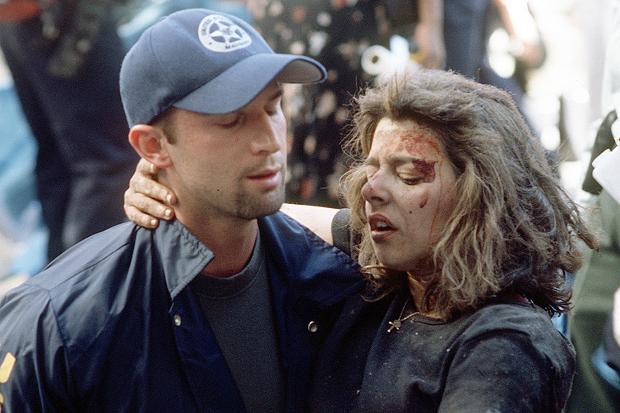 The U.S. Marshals were a catalyst for reassuring a nervous nation after planes hit the World Trade Center in New York; a section of the Pentagon; and a farmer's field in Pennsylvania. There were the first responders among our ranks in New York—represented by a now-famous Associated Press photograph of Deputy U.S. Marshal Dominic Guadagnoli carrying out a wounded victim from the wreckage. "I've got you. You're going to be OK," he recalled to the Marshals Monitor shortly after the event. The act was instinctive of our personnel—and symbolic in the words. That is why the photograph means so much.

What happened around the photograph was as heroic. Of the deputy U.S. Marshals at Ground Zero, Guadagnoli's partner, Deputy (now Chief Deputy) U.S. Marshal John Svinos, recalled, "...we parked a few blocks away and we rushed through the crowd down to the base of the towers. As we were getting to the area, the second plane struck..."Svinos noted that throughout their efforts, he was knocked down by falling debris and navigating through blinding smoke. Temporarily losing track of Guadagnoli, Svinos found a New York Police Department officer who led him far enough from the scene to avoid the tower's collapse. The district office had already assembled a search party and a triage was set. Supervisor Ralph Burnside grabbed Svinos and began cleaning his wounds before he realized it was his own subordinate. Svinos added it was "amazing to see these guys putting themselves in danger to come look for us." Thankfully, Guadagnoli found his way back to Foley Square.

Although this is a snapshot, there were many heroic actions by our personnel that day and afterwards. Most were not seen by the press. Personnel included those from the Southern District of New York, but also the Special Operations Group and the Investigative Services Division. The Technical Operations Group's Bill Hufnagel and Investigator Bill Sorukas combed rubble for remains—in hopes of identifying as many of the missing as possible. Deputy U.S. Marshals (now Assistant Director) Bill Snelson and Tex Lindsey hurried from the Eastern District of North Carolina and worked with U.S. Customs staff on securing the nation's airports. Eastern Virginia's Michael Pyo, with a newly-graduated K-9 assistant named Beacon, was assigned to the Pentagon only days afterward. They sifted through wreckage there for some time, then was assigned to airport details. He recalled, "I ran from [the] Pentagon, to National, to Dulles." Because of the agency's familiarity with air piracy, which was a U.S. Marshals program from 1969 to 1973, it was a natural to turn to them in crisis. Then there were other concerns. Deputy U.S. Marshal (now Inspector) Jeff Cahull attended to the safety of judicial personnel and courthouse facilities in the Eastern District of Virginia. Although there are too many of these actions occurring across our agency to note, all were individual acts of bravery to be commended.

We changed a great deal after September 11, 2001. However, the United States Marshals Service showed its mettle in and after crisis. As the oldest law enforcement agency nears its 225th year, its personnel can remember these contributions to heal the shock and sadness. "Justice Integrity Service" can all be found there.