The operation culminated a unique effort which concentrated on arresting fugitives throughout the State of California. The conclusion of the ten-week operation, which resulted in 2,116 arrests, was announced March 15 in Washington, D.C. by former Attorney General William French Smith. 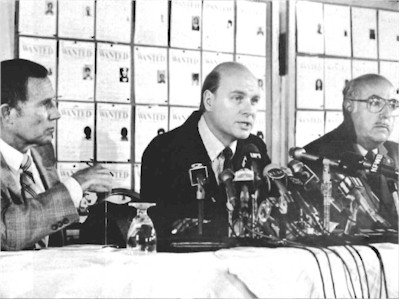 At the same time, a press conference was being conducted in Los Angeles, California by US. Marshals Service Director Stanley E. Morris and the heads of the California law enforcement agencies involved in the operation, including Los Angeles Police Chief Daryl Gates and Los Angeles County Sheriff Sherman Block.

This was the second time that a Fugitive Investigative Strike Team operation has been conducted on a statewide basis. Earlier Fugitive Investigative Strike Team operations in New York City, Washington, D.C., Los Angeles, Miami and Michigan resulted in 2,023 arrests. Of those arrested during FIST VI in California, 79 percent had been involved in crimes of violence or drug offenses, and a total of 2,689 cases were closed as a result of the arrests. Director Morris noted that 24 arrests were for murder, 22 for manslaughter and attempted murder, 39 for rape, 272 for robbery, 646 for narcotics charges, 17 for kidnapping/extortion, 394 for burglary and 58 for sex offenses. Others were arrested on charges of assault, arson, weapons offenses, theft/fraud, embezzlement and counterfeiting.

During the FIST VI operation, which began January 5, 1984 the U.S. Marshals Service established separate command posts in Los Angeles, San Diego, San Francisco, Sacramento and Fresno. They were united by a vast communications and computer network, and throughout the operation Deputy U.S. Marshals paired with their state and municipal law enforcement counterparts to accomplish their vital mission. The camaraderie and high degree of professional motivation exhibited by these teams greatly enhanced the success of the operation.

As in previous Fugitive Investigative Strike Team operations, FIST VI initiated a "scam", this one producing 65 fugitive arrests. The ruse involved creation of the "FIST Bonded Delivery Service", which sent notices to fugitives' last known addresses asking them to arrange for acceptance of a package worth up to $2,000. Sixty-five appointments were made by wanted fugitives for these "packages", only to find that their uniformed "Delivery Man" was a Deputy U.S. Marshal and their package was a pair of handcuffs instead. One subject was highly irate that the Marshals were taking him away before he could claim his "delivery", adding, You don't have to be so mean!"

The overwhelming success and highly professional execution of the six Fugitive Investigative Strike Team operations can clearly be seen in the 4,139 felons arrested and 5,273 cases cleared-all without one subject or law enforcement officer being wounded or killed.