Deputies Versus the Wild Bunch

More than 100 years ago in a quiet little town in the Oklahoma Territory, members of the infamous Doolin-Dalton gang squared off against a posse of deputies in one of the deadliest confrontations in the history of the U.S. marshals.

By the end of the gunfight, nine men lay dead or wounded, and the people of Ingalls had a vivid picture of Western lawlessness and the harsh means needed to restore justice.

Bill Doolin was born in 1858 in Johnson County, Arkansas At the age of 23 he drifted west, working odd jobs until settling in as a top ranch hand along the Cimarron River in the Oklahoma Territory.

While working as a cowboy. he met most of the men who would later form his own gang, a group of colorful outlaws known as the Wild Bunch.

One story recounts that the gang hit the ground running in 1891, when it celebrated the Fourth of July holiday in Coffeyville, Kansas, by tapping a keg of beer.

Problem was, Kansas was a dry state. When lawmen entered the scene to confiscate the alcohol, they were met with bullets. From that day forward, Doolin and his cohorts were on the run, and larceny provided their means of support.

By September 1891, the Wild Bunch had teamed up with the Dalton Brothers Gang to rob several banks throughout the region. A year later, however, Doolin took control after most of the Daltons were killed in a raid on two banks in Coffeyville.

A string of heists followed for the newly consolidated Doolin-Dalton Gang, whose members were quite good at alluding capture. But in the fall of 1893, deputy marshals zeroed in when they discovered that the marauders were using the town of Ingalls as a hideout between raids.

The stage was set for a fateful battle.

The lawmen moving in for the arrests were headed by Deputy Marshal John Hixon, who brought four other deputies with him - Lafe Shadley, Tom Hueston, Dick Speed and Jim Masterson. An additional eight men joined the ranks as posse members.

In the gruesome confrontation that afternoon, Hueston was fired on as he dove for cover. Doolin shot Speed dead as the deputy tried in vain to join Shadley, who was concealed behind the body of a horse.

Then, when Shadley saw one of outlaws fall wounded, he moved in. But Dalton shot him in his tracks. Masterson later threw dynamite into the outlaws' hiding place and captured Jones, but the others fled southeast out of town.

The escaping outlaws halted at the top of a nearby ridge long enough to fire some final shots at the lawmen, and one of those bullets killed Frank Briggs, an innocent bystander.

All told, men on both sides of the law met their destiny that afternoon. Deputy Speed was killed during the actual fighting; Deputies Hueston and Shadley died of their wounds the following day.

There was talk of Arkansas Tom Jones being lynched, but instead he was sent to the federal prison in Guthrie, Oklahoma Territory, about 35 miles away. 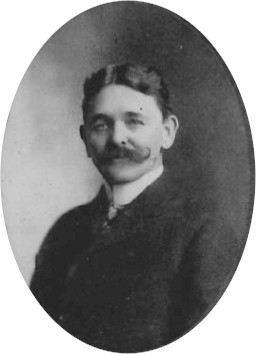 In the Marshal's Own Words

E.D. Nix was the marshal for the Oklahoma Territory at the time. In his book, "Oklahombres", published in 1929, he specified this fight as one of the more critical of his entire career. It, of course, was also one of the most devastating, with three deputies losing their lives. (Nix, shown on right, was appointed U.S. Marshal over the Oklahoma territory by President Grover Cleveland. He supervised the work of over 150 deputies, including the famous Three Guardsmen.)

Nearly two years after the Ingalls confrontation, the marshal pieced together the details of the fight in a letter he wrote to Attorney General Judson Harmon. The letter came about as a response to a man named Murray, who was tending bar of the fight.

Murray was arrested that day for harboring the criminals. Having been shot by deputy marshals during the battle, he was now complaining of damages and seeking redress.

Nix's letter to Harmon, dated July 30, 1895, is housed in the National Archives. the transcript, containing all of the original spelling and punctuation follows.