Bicentennial of the U.S. Marshals Service 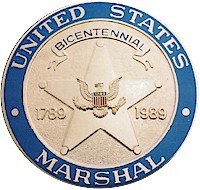 Two hundred years ago, on September 24, 1789, President George Washington signed into law Senate Bill Number One, known as the Judiciary Act. This Act established the Federal judicial system and created the Office of the United States Marshal. Only two days later, President Washington nominated the first United States Marshals responsible for enforcing the Nation's laws and carrying out the orders of its courts.

As American pioneers pushed to the West, U.S. Marshals faced grave dangers and constant hardship on the frontier. They later helped to maintain social order and facilitate the difficult task of Reconstruction following the Civil War. United States Marshals also played a vital role in enforcing provisions of the Civil Rights Act during the turbulent years of the 1960s. During two centuries of service to our country, more than 300 United States Marshals and Deputy Marshals have died in the line of duty. Their supreme sacrifice reveals the great personal risks that U.S. Marshals continue to accept each day.

Today, United States Marshals are engaged in virtually every Federal law enforcement initiative. Marshals provide for the security of Federal courts, including the protection of judges, witnesses, jurors, and other court personnel. They play a major role in the pursuit and capture of fugitives from justice, and Federal prisoners awaiting trail or sentencing are entrusted to their custody. They also operate the Witness Protection Program, which is responsible for protecting persons who testify for the government in major criminal cases.

In one of their most important current functions, U.S. Marshals administer the program under which the assets and profits of drug traffickers are seized, managed, and sold. The proceeds from such sales are used in our Nation's fight against crime and drug abuse. This summer alone, the U.S. Marshals Service led an anti-drug effort involving 10 local police agencies in the Nation's Capital and its suburbs. That initiative resulted in the arrest of hundreds of career drug criminals and the closing of scores of suspected "crack houses."

An unfailing respect for the rule of law and the rights of individual Americans has motivated the courageous men and women of the United States Marshals Service throughout its history. Their legacy of personal sacrifice and public service merits the appreciation of every American.

In recognition of the vital efforts of our Nation's oldest law enforcement agency, the Congress, by Senate Joint Resolution 352 (Public Law 100-683) has designated September 24, 1989, as "United States Marshals Bicentennial Day" and has authorized and requested the President to issue a proclamation in observance of this day.