Wayne Colburn had a total of 34 years in the field of law enforcement, and served as Director of the United States Marshals Service from January 1970 to May 1976.

At the time of his retirement, then Deputy Attorney General Harold R. Tyler, Jr. said, "Wayne Colburn's contributions to the professionalism of the Marshals Service have been magnificent."

Wayne Colburn began his career in law enforcement in March 1943 by joining the San Diego Police Department (SDPD). His tour of duty with SDPD was interrupted when he was recalled to active duty with the Marine Corps. He later returned to the police department and in 1951 was promoted to the rank of Sergeant. Three years later he was promoted to Lieutenant arid took command of the Mid-watch, regarded as the training ground for new officers.

In 1957, he was promoted to Captain and placed in charge of the newly created Southern Division. As the highest ranking official in South Bay, Wayne established solid working relationships with citizens anti law enforcement officials on both sides of the border. In 1962, he was promoted to Inspector and assigned to head the entire patrol division. He was highly commended for his professional and outstanding performance during the major difficulties of the early '60's. 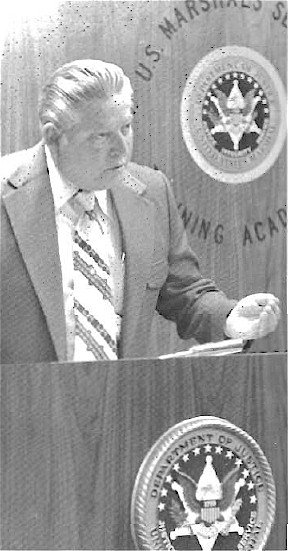 After 25 years with the San Diego Police Department, Wayne B. Colburn was appointed by President Johnson to the position of United States Marshal for the newly formed Southern District of California.

He also personally directed numerous operational programs such as the Air Piracy Program, and the long siege at Wounded Knee, South Dakota in 1973.

His driving ambition was to upgrade and professionalize the Marshals Service, a task that required tough and decisive management. Wayne proved that he had that capacity.