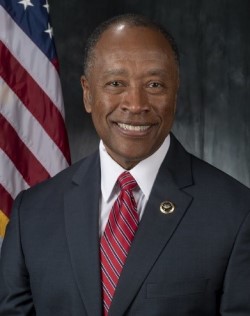 Donald W. Washington was nominated by President Donald J. Trump to lead the United States Marshals Service (USMS) on Oct 2, 2018. The United States Senate confirmed his nomination on March 14, 2019, and Washington was sworn in as the 11th Director of the U.S. Marshals Service on March 29, 2019. As the leader of America's oldest federal law enforcement agency, Director Washington directs a force of more than 5,000 operational and administrative employees spanning 94 districts, 218 sub-offices and four foreign field offices. Additionally, as the U.S. Marshals Service holds a central position in the federal justice system, Director Washington is responsible for all operations involving federal judicial security, fugitive apprehension, witness security, asset forfeiture, and prisoner operations.

Director Washington hails from Sulphur Springs, Texas and graduated from the United States Military Academy at West Point, New York in 1977. He served in the United States Army as an Air Defense Artillery Officer both on active duty and in the U.S. Army Reserve. In 1989, he received his Juris Doctor from South Texas College of Law, Houston, Texas.