Reward of up to $5K offered for each woman

Charleston, WV – The U.S. Marshals of the Southern District of West Virginia, Cops United Felony Fugitive Enforcement Division (CUFFED) Task Force is working with the Bluefield Police Department and offering a reward of up to $10,000 for information leading to the arrest of two Bluefield women accused of killing a 13-year-old girl.

Nichole Brooks, 43, and Isis Wallace, 22, are alleged to have fired multiple rounds into a vehicle occupied by three people, while they were sitting at a red light March 23 near the intersection of U.S. Route 460 and Cumberland Road in Bluefield. The victim was discovered in the back seat with a gunshot wound to her head. She was transported to CAMC General in Charleston and later died from her injuries.

Warrants for first-degree murder were issued March 24 for Wallace and Brooks. 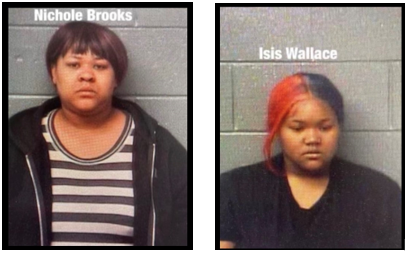 "The Marshals Service is committed to making communities safer," said Michael Baylous, U.S. Marshal for the Southern District of West Virginia. "That is why we have elevated this investigation to major case status and are offering a $5,000 reward each for the capture of Nichole Brooks and Isis Wallace. We believe these two women present a significant threat to public safety. The sooner we have them in custody, the better."