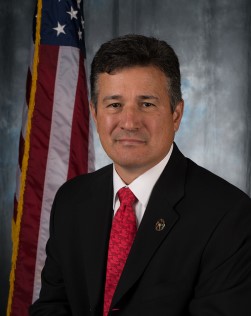 Gary G. Schofield was nominated by President Donald J. Trump to serve as the United States Marshal for the District of Nevada. He was sworn in on April 27, 2018.

Marshal Schofield leads the operations of the U.S. Marshals Service in Nevada. Additionally, he serves on the Nevada Joint Terrorism Task Force Executive Board, the High Intensity Drug Trafficking Area Executive Board, and the Organized Crime Drug Enforcement Task Force executive board.

Prior to being appointed, Schofield served at the Las Vegas Metropolitan Police Department (LVMPD) as a Deputy Chief of Police. As Deputy Chief, he led major divisions of the agency that covered all facets of operations and administration at the Las Vegas Metropolitan Police Department composed of over 6,000 employees. He implemented the training and accountability portions of the Department of Justice Collaborative Reform Process. The reform process implemented major reforms in the Use of Force and reduced the amount of deadly force by offices of the agency. As a result, he was asked to testify at the Presidents Commission on 21st Century policing on the need for effective police and community efforts as well as the need for effective leadership and training programs.

Marshal Schofield has served on multiple community boards. He is a former member of the Board of Directors of the Red Cross of Southern Nevada, the former Vice Chair of the Sunrise Manor Town Board, was a member of the Southern Nevada Regional Planning Coalition Committee on Homelessness. He also served on the State of Nevada Police Officers Standards and Training Commission as one of the commissioners appointed by Governor Sandoval.